Since the 2013 RWE-Gazprom arbitrage, we estimate that less than 50% of the wholesale gas sold in Europe is under oil-indexation contracts. According to the International Gas Union, gas-to-gas competition accounted for 53% of total gas consumption in Europe in 2013.

If we look at the average yearly prices of natural gas sales realized by Gazprom in Europe (where oil-indexation predominates) and compare these to the average NBP Month Ahead price, we find that:

– Prior to the crisis, Gazprom’s oil-indexed prices in Europe were trading around the NBP with a spread that ranged from -27% to +24%; this can be explained by the time lag (3 to 9 months) used in the oil-indexation price formulae.

– In 2009, with the full impact of the economic crisis, spreads increased to a massive 70%! This also shows that, in 2009, European gas prices did not move down as fast as oil prices.

– From 2010 to Q1 14, renegotiations and arbitrations on the one hand and higher spot prices on the other have resulted in spread compression. In 2013, prices were nearly aligned (with less than a 5% spread), indicating that prices are once more closely linked. By not pushing volumes too much, Gazprom/Russia and Statoil/Norway not only avoided a price war in 2011-2013 but managed to reset spot prices to a level acceptable to them.

– In Q2 14, Russia pushed a lot of gas into Europe (to incentivise injection into storage to mitigate any potential disruption via Ukraine later in the year) while we witnessed very weak demand (-18.1% in H1 14 vs H1 13). As a result, spot prices went down, further increasing the spread with the recently disclosed Gazprom figure for its realized price in Europe. 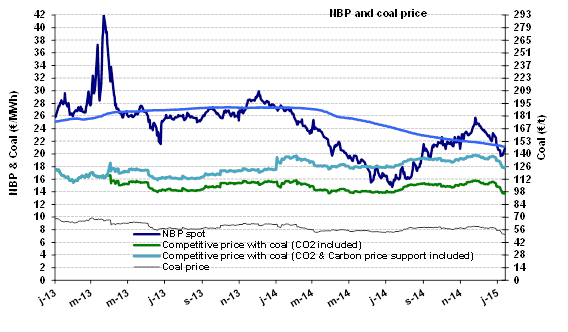 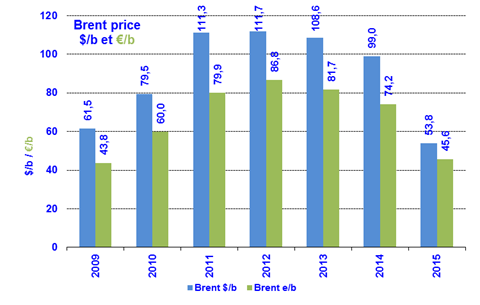 In 2014, the Brent price stood at $99/b, down by nearly $10/b compared to 2013 ($108.6). Of course, the major event of the year was the Brent’s plunge from $112/b in June to $62/b in December. The trend continued in January 2015: the Brent lost another $10 and reached $45/b. The reason for this downswing, over and above flagging economic growth and the dollar’s progression since June (-12% for the euro, worth $1.18 in January), is OPEC’s decision on November 27 to abandon the role of swing producer. OPEC aims to get producers of non-OPEC oil, LTO and high-cost unconventional oil to slow their increase in output to avoid a steady erosion of OPEC’s market share.