In 2014, the LNG year was somehow a replica of the previous one as it was characterized by rising Asian demand, decreasing European demand and a high price differential between the two biggest LNG markets. In 2015, as the trade data of Q1 show, the dynamics are likely to be different. First data show that the pressure on the Asian market is falling due to lower demand and growing production in the Pacific basin. In addition, gross imports are increasing in Europe while the re-export business is collapsing. Elsewhere in the world, the LNG industry continues to develop, as new projects keep coming on stream.

Nor are forward markets anticipating a downtrend for the next few months as sharp as that occurring in 2014, with the NBP falling below €17/MWh ($6.8/MBtu) between June and August. The forecast is that prices will slip to €19.8/MWh ($6.6/MBtu) during the summer. 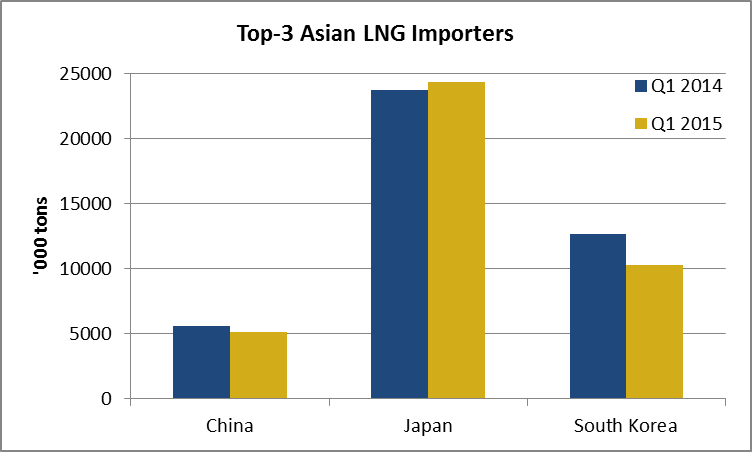 In Asia, LNG purchases of the regional top-3 buyers (Japan, South Korea and China) decreased by 5.5% year-on-year in the first quarter of 2015. Imports fell from 42 million tons to 39.7 million tons, pulled by a 19% drop in South Korea (-2.4 million tons) where higher inventories and another mild winter pushed imports down. Lower demand for natural gas was highlighted by the drop in KOGAS’ domestic sales (-7.6%), mainly due to a fall in sales to the power sector (-14.3%).